So, I've been trying to write this childrens story all day. Trying to formulate it in my head, but its kinda hard when you have a million and one distractions.  I try to keep a positive spin on distractions, as they can add to the story to some extent.  In this case, going to the boardwalk provided some inspiration.


The Town that Fun Built 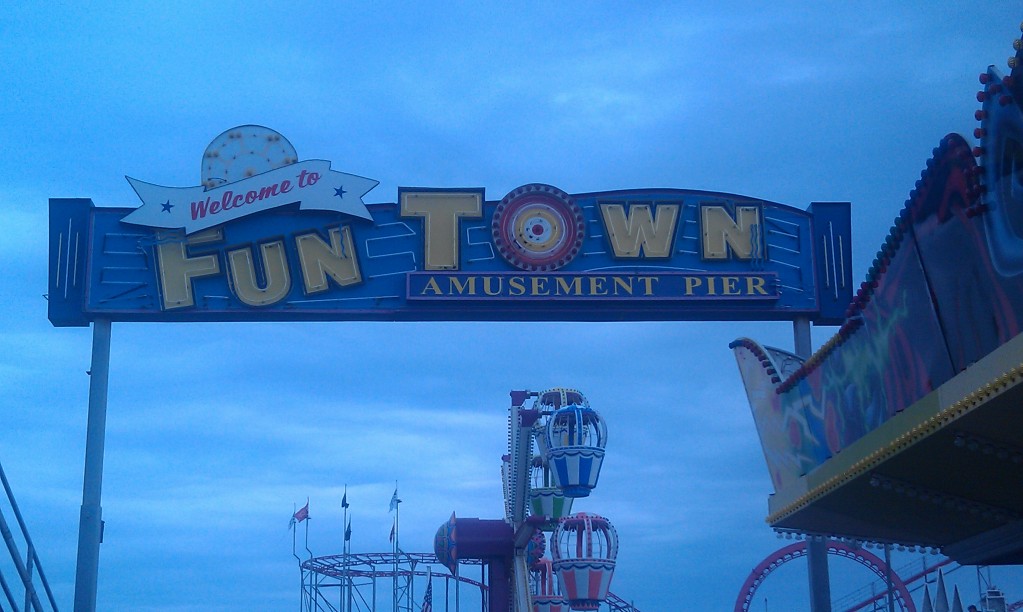 Today is a big day for Nicholas.  He is 10 years old, and his family is taking their first trip to the Jersey shore.  They live in Brooklyn, and usually spend their free time in Coney Island.  However, his uncle recently bought a car (quite a luxery in Brooklyn for 1963) and wanted to explore.  His family heard of a shore town that had a gigantic boardwalk for all the tourists and gorgeous, pristine beaches.  Nicholas didn't really want to go to yet another boardwalk, with the crowds and children running wildly about, but he didn’t have a choice in the matter.

You see, Nicholas was a peculiar child.  Instead of hanging out all day like the neighborhood kids, Nicholas preferred reading quietly in his room.  Places with too many sounds, lights, and smells bothered him to the point of exhaustion.  The first time he was in Coney Island, he found the nearest dark corner and hid for most of the day.  His parents socialized him as best as they could, but generally accepted him as he was.  But in Russia, all of the schoolmasters wanted to send him away to an institution like the other "weird" and "special" kids.  Nicholas's uncle Ivan advised his sister Sveta to move to the US to avoid this.  Now, Nicholas and his parents live next to his uncle's family in Sheepshead Bay.

At the crack of dawn, the family loaded up in the big station wagon and headed out of Brooklyn.  Along with Nicholas's mom, Sveta, came his Uncle Ivan and Aunt Katya, and his cousins Ivan Junior and Yuri.  The children sat in the cab while the parents happily chatted away up front.  While Yuri and Ivan played amongst themselves, Nicholas watched the scenery from the back window.  Pretty soon the car entered New Jersey; after the Raritan River Bridge, the highway was lined with nothing but green trees and farms.  This was the family's first jaunt out of Brooklyn, and Nicholas wasn't quite used to this much greenery.  But the vast amount of trees and fields mesmerized him.  He was having fun counting the farm animals and studying the vast amount of green trees.

Finally, after driving an hour through this seemingly infinite wilderness of green trees and farmland, the family reached a shore town called Seaside Heights.  The family drove through the store laden streets and left the big station wagon in the maze of city parking.  Once on the boardwalk, the family was astonished by the sheer length of the beach. Nicholas was more impressed with the drive; to him, entering NJ felt like this brave new world, where people can spread out as much as they like.  He'd heard that people here had homes with almost a hectare of land! Land was such a commodity in Brooklyn, and whatever free space that was available had to be shared with the neighborhood kids.

The boardwalk seemed much larger than the boardwalk of Coney Island, and there was a greater selection of food and games.  Zeppolis, ice cream and burgers, plus scores of stands lined with bottles waiting to be knocked down and balloons to be popped.  Plus, this place had giant roller coasters on Casino Pier, as well as Lucky Leo's, which contained the largest game stands and biggest prizes.  The family decided to spend the day near Lucky Leos.  When Nicholas first walked on the boardwalk, he was overwhelmed by the cacophony of stand workers pitching their games to the crowds of rowdy tourists.  Just as in Coney Island, Nicholas found an obscure segway, and tried to hide.  What he didn't realize was that this segway's wood was not particularly sturdy.  When Nicholas sat on it, the wood broke, causing Leo to fall under the boardwalk onto the hard sand.

So he stepped onto the sand, walked towards the water and opened up all of his senses to this magical place. He could taste the breezy salt air as he walked towards the ocean.  The sun beat down on the seemingly endless beach as the sand was initially hot to the touch.  It then changed texture from dry and fine to wet and coarse; finally, the sand was so watery it couldn't hold the shape of Nicholas's footsteps.  Since this was the beach, Nicholas figured, it only seemed right to take a dip into the ocean.  So, he took off his shirt and shoes, and dove into the sea.

He was initially amazed at the strong current, so he made sure to keep where he could stand in the ocean.  But once he had gained his bearings, he was in love with the feeling of the tide's ebbs and flows.  This current seemed to carry him towards the crowds again, so he walked further south, his feet squishing the sand and rocks between his toes.  He could see the crowds of surfers dancing on the water while a fishing yacht went to sea.  He did not mind seeing all of the sunbathers frolicking in the surf as long as the view was from afar.

As he was floating along, he could see a lifeguard swimming out towards him. Nicholas did not realize how far he had floated in the ocean, getting dangerously close to a buoy.  One of the lifeguards swam up to him, placed him flat on his board and gave a "thumbs up" signal to the other lifeguard on the beach.  Then he swam back with Nicholas in tow.  Once back on land, the lifeguard then asked Nicholas if he was ok, to which he gently nodded.

Nicholas started to walk towards the boardwalk when suddenly, he could see a tall blond lady checking all of the alleyways of the boardwalk.  Sure enough, Nicholas's mother was looking for him.  He walked up onto the boardwalk to reassure his mother he was safe.  When he mother saw him, she shouted, "Nicholai!" and hugged her son.  Almost immediately, she started pegging Nicholas was questions.  "Where were you?" She then switched to Russian "And where is your book?  And where are your shoes and shirt?"  While these were fair questions, Nicholas did not have an immediate response.  His uncle chimed in with, "Your mother was worried about you!  Next time, stay close by!"  He then ordered Yuri and Ivan to retrieve Nicholas's belongings at the end of the boardwalk.

Thankfully, the sun was shining in full force, and Nicholas was dry in less than an hour.  His clothing was still full of sand, and he had to go with his uncle to the bathroom to shake off the sand.  When Nicholas was done, he met his uncle at the bathroom sink.  His uncle continued sternly, in a thick Russian accent, "Your mother was very concerned for you today.  That was wrong of you to walk off like that."  As they were walking out of the bathroom, his uncle said, "I have one question for you."  Nicholas turned around, and his uncle was smiling.  He asked, "Was the ocean fun?"


Nicholas beamed with pure joy.  Uncle Ivan has not seen him this happy since Nicholas left Russia.  He rubbed Nicholas's head and replied, "My boy!"  This was surely a day that Nicholas would never forget.